We share and recommend on Social Media - be sure to join

Social Media has changed the world dramatically and made the internet humancentered. The Internet was initially a place where one could advertise with ones websites, mostly as an alternative phone book, but today it is a dynamic platform where people are cross-linked across generations, gender, jobs, interests, national borders, etc.

We have in connection with the explosive use of social media created a recommendation economy. We are quick to share merciless criticism if we have been poorly treated by a company, have purchased disappointing products or services. But conversely, we also tell if we have experienced good treatment and good products and do not hesitate to share our recommendations with others.

Of course, the companies must be aware of this world, and therefore it is extremely important for a company to be present on the social media. But it is different from company to company, where one has to concentrate the efforts. It depends on the products or services you sell, what the target group looks like and what goals you have.

How many Danes use social media?

The figures below show the percentage of Danes who on a daily basis, were using the different social media in 2015:

Not surprisingly, Facebook has an impressive position. But these figures cannot stand alone. For example, one might be tempted to ignore LinkedIn. Although LinkedIn is only visited by very few daily, there are quite a few members.

As these figures show, LinkedIn is also an important channel to profile the company's messages. But again - where to put in your efforts depends on your product and your target audience. For example, if the target group is under 20 years, LinkedIn is naturally not important, but Snapchat plays a large role.

The Danish Agency for Culture issues an annual report on the Danes' media use. Here are some facts from 2015 report:

Statistics Denmark also makes a report every year (see 2015 og 2014), and here are some facts from the latest:

How many companies use social media?

The graph below from Statistics Denmark shows that every other Danish company uses social media. It also shows in which industries the use is greatest and how large a share uses more media. Not surprisingly, the activity increases with the size of a business. Thus, 65 pct. of companies with over 100 employees social media, while the proportion for companies with 10-19 employees is 45%. 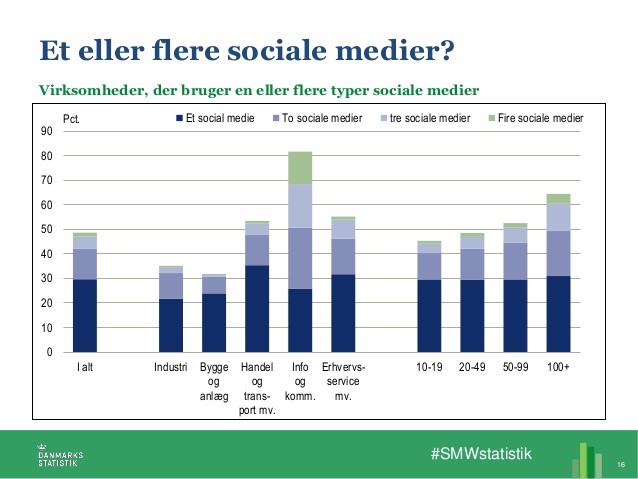 What are we sharing and enjoying?

In the Danish Agency for Culture's investigation, the biggest losers in the fight for the users' interest and attention are "Sport", "Famous People and Commercial Content", where 65,3%, 68,5% and 70,8% respectively answer that they do not engage in this topic. 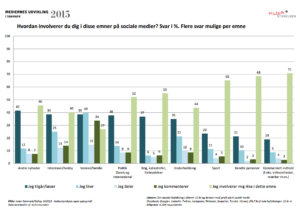 There is a big difference between the different age groups from young people to the elderly, but it is important here to note that "Commercial content" has the lowest status. This is where companies need to be inventive if they want to engage people.

And that's an art.