" We are not here to close spreads ”.

You probably shouldn't have said that, Christine Lagarde. The head of the ECB went wrong on Thursday with the remark, which did not diminish but increased stress in the market. The reaction was immediate. The interest rate spread on Italy's, Spain's and France's 10-year government bonds relative to Germany were significantly expanded.

She could have sought inspiration from predecessor Mario Draghi's famous words in July 2012 during the Euro crisis.

“Within our mandate, the ECB is ready to do whatever it takes to preserve the euro. And believe me, it will be enough. ”

Bond prices responded positively immediately, and a week later the ECB announced a program to buy bonds in pressured eurozone countries. It was not implemented - the promise was enough to ensure a significant drop in spreads against Germany in the second half of 2012. Lagarde did not make such promises at the press conference - she said directly that she has no intentions of staying " whatever it takes, number two ”.

But narrowing spreads and creative monetary policy are also not enough to counter the economic shocks that are hitting Europe right now. A recession is underway and tensions will arise. Maybe a new euro crisis is brewing, and maybe a broken euro - it depends on the development of the virus.

Europe survives, but a collapse in the euro project, which many have been doomed from the start due to the great structural and economic differences between countries and the lack of a common fiscal superstructure, will cause a lot of trouble with potential state bankruptcy, sharp devaluations, uncertainty on the Schengen Agreement, the Internal Market, the EU…

Now we're not going to paint the Devil on the wall, but he's in the paint bucket - with Italian accent. Because if it goes long with the Coronavirus and the shutdown of the economies, then big rescue packages are needed from the treasuries to the many pressured companies and an explosion in the number of unemployed. This means growing debt in the euro area countries. Here, Italy is at the brisk end of the scale already and unless the ECB and Lagarde step in, Italian bond market financing will be at much higher interest rates, which will only make it all worse.

Italy has the second highest government debt in the EU with 134,8 per cent. of GDP - surpassed only by Greece, which is a much smaller country with only 10,7 million. inhabitants against Italy's 60,5 million. In comparison, the euro average is 85,9 per cent. and Germany 61 per cent.

You can be creative with monetary policy during extreme periods, and it cannot be denied that the ECB devises something with "helicopter money" (print money and give it to citizens) or something like that if the Coronavirus turns out to be completely out of control, and the recession and bankruptcy rates among companies in Europe are widespread.

But monetary policy cannot do everything. The future of both the euro and the EU is at stake, and there is a lack of clear statements from the leaders of the various countries about the need to stand together. The gaze is i.a. directed at Angela Merkel, who the other day said that 70 per cent. of Germans can get the virus, but have not said anything about Italy, the virus' hotspot in Europe, needing special help. Instead, Italy has received experts from China, who have also promised to supply 2 million face masks, 20.000 protective suits and 1.000 respirators. A development that only makes the Italians' aversion to the EU even greater. They have already felt let down by the other Member States during the migration wave, and there is a great and growing aversion to globalization, elitist governance and the euro project itself, which has been of no benefit to Italy. If Italy leaves the euro, it will trigger dominoes and unrest that could lead to the collapse of the euro and threaten the unity of the EU.

It is the hour of truth for Europe.

Italy stands out in the euro zone by having major structural problems. The economic growth below 20 years of euro membership is frighteningly low. Under 10 per cent. against 30 per cent. for the eurozone as a whole, a June 2019 ECB report shows. 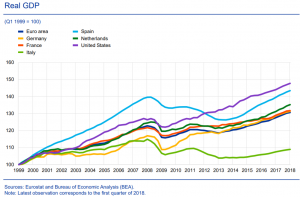 And then there is the pension challenge. Like many other countries, Italy has the challenge of a longer life, combined with the retirement of the great post-war generations and younger generations not having as many children. Especially not in Italy, where the numbers say 1,3 children per child. women against 1,6 in the EU as a whole. Over the past 40 years, the number of people over 65 per 100 people of working age (20-64 years) increased from 20 to 31. By 2060, the figure is likely to have almost doubled to 58, according to the OECD Pensions at a glance 2019, and that acceleration is putting pension systems and treasuries under pressure. Currently, the figure for Italy is around 40 (like Finland), surpassed only by Japan at 52. In 2060, the figure for Italy is expected to be 74,4 - and thus still among the world's highest in the company of Spain 78,4; Korea 78,8 and Japan 80,7.

There is tension in the euro co-operation and it is difficult to imagine the euro intact in 2060 without many years earlier having taken the big step to the United States of Europe with common fiscal policy. Something has to happen.

And many things will happen in the wake of the Corona virus. China has taken drastic steps to bring the infection under control - several hundred million. people are in some form of isolation with very limited freedom of movement, and many factories are closed down in the world's largest production center.

It has fueled the deliberations of many companies in the world that have shipped full or partial production to China because it is a low-wage area. Many people will probably choose to move production to other countries closer to or to their home country and increasingly apply automation technologies. A deglobalization that was already underway is gaining extra momentum from the Coronavirus.

Can the pandemic be stopped?

In recent years, the world has experienced an increasing number of epidemics. Among the best known are SARS, swine flu and MERS, but about 200 epidemics occur annually. The development led WHO to introduce "Disease X" in the list of pathogens that are most likely to cause deadly pandemics in 2018. A move intended to encourage reflection, possible action and response in research and development in preparation for an unknown virus that suddenly emerges.

It was followed up in October 2019 by an experiment at Johns Hopkins University. A simulation of the spread of a new coronavirus in the family with SARS. Fifteen executives from business, politics and public health authorities participated in the simulation and had to deal realistically with the dilemmas and challenges that arise along the way. Read more on the experiment website and see the videos here - the course is frighteningly reminiscent of what we are experiencing right now. 18 months inside the simulation is 65 million. people died and the status of the pandemic is as follows:

The pandemic is beginning to slow due to the decreasing number of susceptible people. The pandemic will continue at some rate until there is an effective vaccine or until 80-90% of the global population has been exposed. From that point on, it is likely to be an endemic childhood disease.

Shortly afterwards, the first cases of COVID-19 arrived in Wuhan. Disease X - in the form of SARS-CoV-2 and COVID-19 - was suddenly a reality. It has set in motion conspiracy theories, but let's ground them right away. No one has an interest in spreading a deadly virus that can affect us all. In addition, scientists estimate that SARS-CoV-2 was not created by humans.

"Importantly, this analysis provides evidence that SARS-CoV-2 is not a laboratory construct nor a purposefully manipulated virus," it appears this study.

But accidents happen in laboratories, and experimental research itself can be associated with very high risk.

For example, it emerged in Science in February 2019 that two laboratories - in Wisconsin and Rotterdam - had secretly been approved by HHS, the Department of Health and Human Services in the United States, to resume experiments that were banned in 2014. The experiments went to develop H5N1 so that it could be transmitted more effectively between ferrets - a member of the marten family that catches the flu virus in much the same way as humans.

The researchers therefore worked to modify the virus so that it achieved a "gain of function" - so that it could spread through the air between mammals, including humans. Harvard University Professor of Epidemiology Mark Lipsitch calculated, based on laboratory accident statistics, a 0,01-0,1 percent risk that a single year of experiments with deadly, contagious influenza virus could strike between 20 million and 1,6 billion people. to death. Read more about this in min article in the Weekendavisen.

But back to the question of whether the pandemic can be stopped. Not according to the experts. Lone Simonsen, professor of epidemic and global health at Roskilde University, who was a researcher at the NIH in the United States in 2003, when SARS ravaged the recent statement to the DR that pandemics cannot be stopped. She expects 20-60 per cent. of all are infected during the next year's time.

Maybe there is some hope ahead. It is possible that the virus disappears during the spring and summer as normal flu. And it could be that a vaccine is being developed - that is being worked on at high pressure around the world. But perhaps the most realistic hope is simply that the infection can be slowed down so much that hospitals can keep up.